myownplace
11/17/2015
Coco Cay cruise Freedom RCCL St Maarten St Thomas
At the beginning of the month we went on a nice long seven night Caribbean cruise aboard the Royal Caribbean Freedom of the Seas ship. It was the first time we've been on one of those humungous ships with close to 4000 passengers. And it was just as I thought it would be. Cruises are great fun, but there are also moments of frustration when you feel like an ant among the throngs of people and your expectations are just not being met.
I have to say the ship was very pretty. But I also have to say I didn't care for some of the changes to accommodate more people in the same amount of space. The Windjammer dining area is completely enclosed ending the back of the ship open outdoor seating that we always preferred. We like to eat breakfast out on the patio deck but alas it is not possible on this ship unless you want to hike a half a block to get outside to the pool with your hands full of plates, bowls, beverages, silverware and napkins. I also didn't like the Solarium being open roofed. It took away the quiet, humid ambiance the area usually has. It was loud, crowded and breezy. We didn't even sit in the Solarium once this cruise and usually it was somewhere we would hang to read or relax and have a snack or drink a beer. And of course use the hot tub. This ship did have the hot tub that hangs over the edge of the ship, but is sounds more dramatic than it actually was, but the tubs were not hot enough, probably only about 100F.  ﻿

We did really enjoy the first destination Coco Cay which is a private island owned by RCCL. We rode the tender boat across the bay and got the great photo of the ship. Once we arrived at the island we wandered around the nature hike, and did a lap of the island. There are beautiful beaches, loungers, hammocks and chairs everywhere. The ship also off loaded a full BBQ lunch for everyone, and cases and cases of beer too. We bought the beverage packages where you can drink all you want and this included the beer served on the island too. So it was a great place to listen to some island music, eat lunch with the chickens and roosters wandering around, and drink a cold Corona. 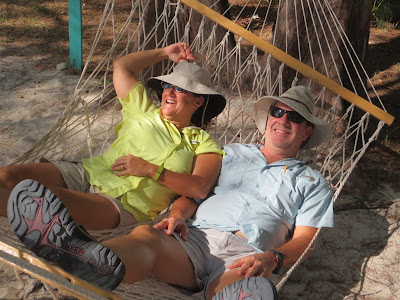 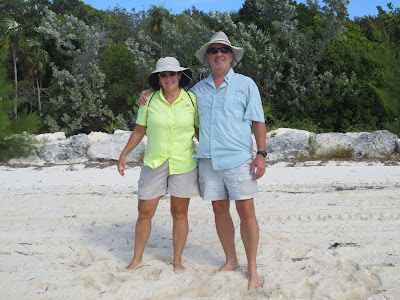 We saw huge lizards on Coco Cay, the liked to hang out on the rocks of the inlet.
We had really nice weather with warm skies and a nice breeze throughout the cruise.
Formal night was night two and night six. We really enjoyed the great food in the main dining room, and in the wind jammer. Between the food and beer, I gained 7 lbs in 7 days (which I have since lost in 7 days). It was so fun to eat salmon lox and croissants for breakfast, bacon and eggs, and fresh fruit. We enjoyed fresh bread at dinner, along with a couple of the appetizers and even split an extra entrée when we couldn't decide between two choices or we just wanted to try something new.
Unfortunately, the one area of the cruise which didn't meet our expectations was the main dining room. We started out a 10 top table with only four of us assigned to the table. The service was great for two nights but then the dining room manager asked  us to move so a split up family could have the big table. No problem we thought we'll move. Well after that our service tanked in the main dining room. We expressed our displeasure but things never improved night after night. It was very frustrating and finally by the last night we skipped the dining room and opted for sushi in the wind jammer. Apparently the new bigger ships (Oasis and Anthem) are getting the good staff from other ships and new staff are just not trained in.
Our second destination was St Thomas USVI. At this location we opted to do the kayak, hiking and snorkeling excursion. We paddled out to a cove or bay and then hiked around and then snorkeled looking at the fish in the water. It was a fun day.
This was our first time ever kayaking together, despite our hundreds of miles in the canoe together and it was like learning all over again. Our strokes are different strengths and that makes it a little more interesting. The video above is part of our kayak experience.
Scott and Marie standing on the rocks of St Thomas.

The ships entertainment was very good. There were lots of shows, magic, comedians, dancers and music. They even had a rock concert in the theatre, Led Zepagain a tribute band to Led Zepplin.

Our final destination was St Maarten. We participated in the Americas Cup Yacht Racing excursion. We did this a couple years ago and it was great fun so we decided it looked the most fun so we did it again. Scott was the main sail trimmer and I was the timekeeper. After we won the race, the captain let Scott drive the sail boat around the bay. If you go HERE (all cruise photos) you can see go pro video of our sailing, plus all the other photos we took. 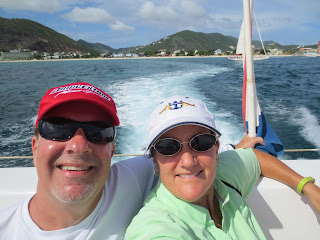 During our days at sea we did lots of the activities like sudoko puzzles, workout room, trivia contests, scavenger hunts and line dancing.﻿
﻿
I have to say even though I'm getting old, it seemed like most people on this cruise were older. There were not many kids which is okay, but it was not quite as easy to meet and talk to strangers as it should be. Old people keep to themselves. The younger adults tended to hang around together at bars or hot tubs or pool areas and they just didn't mingle with people our age who look like we could be their parents age. Don't get me wrong, we did meet some nice friendly people, but not as many as I thought we would. 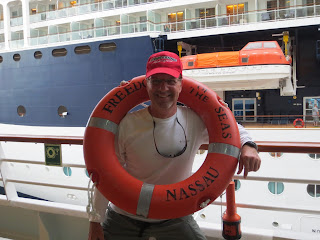 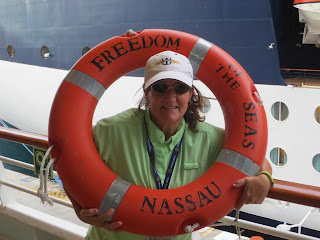 This cruise, we had a balcony room on the hump in mid ship. It was nice to have a private area outdoors since the ship is so crowded. The promenade deck 5 is not too bad and you can walk laps around the ship without congestion. We pretty much used the stairs for getting around in our efforts to get 10,000 steps each day (which we did!). We only used elevators if we had to climb more than 6 flights. It was 4 flights each morning from deck 7 to 11 for breakfast, and then again for lunch, and four flights of stairs for dinner from deck 7 to deck 3 to the main dining room.
We attended the back stage tour and learned all sorts of interesting stuff about the sound, lights, costumes, stage sets, rigging and mechanics of putting on a show. One tip I don't want to forget is they mix 2 parts water with 1 part vodka to make a deodorizer mixture in a spritz bottle to spray on high sweat areas of the costumes to keep them fresh. Costumes are only washed once a month. 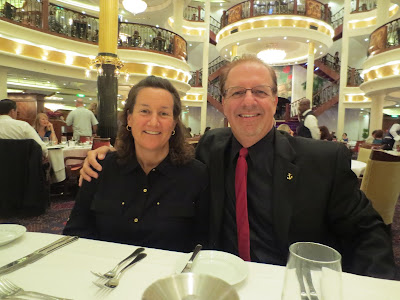 In conclusion, it was a nice cruise but not the best one ever. It is much more fun to cruise with friends or family. We are platinum status now, on our way to emerald. Whatever that means. The only perk I noticed we got was an invite to a party to meet the captain and get free food and drinks. Big deal, we had free food all week and beer in our drink package. Anyway, they did recognize the Pinnacle couple with the most points had over 2000 points. They had been on Freedom of the Seas 69 times, and of the remaining 9 weeks in this year, they were booked on 5 more cruises. I sure hope they're shareholders.

See all the photos here