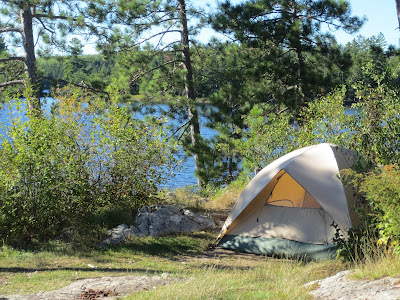 Lake Saganaga is a big lake with lots of islands and places to get lost, including Canada. Its Northern lakeside is in Canada and the south shore is in Minnnesota. We started our canoe trip from the Saganaga River, at entry point 55 which is where the Voyageur Canoe Outfitters resort is. We had a nice pancake and sausage breakfast and then loaded our bags into a nice lightweight Wenonah Canoe, the Boundary Waters edition that weighed a mere 42 lbs. What a joy that was, compared to the heavy royalex canoe we used last year. Its kind of like getting a balcony room on a cruise, you never want to go back to interior. We won't get anything but the lightweight Kevlar canoes in the future. We do have a 17 ft Sawyer royalex canoe at home which weighs 70 lbs, but soon we'll sell it and get a lightweight one.
We shoved off the beach this time, unlike last year when I fell off the dock loading the canoe. Got totally drenched before we even started the trip. This year I wasn't as nervous as last year because we knew what to expect. The weather was nice and sunny and it seemed like it would warm up, but it was windy. Windy is not good on a big lake and we paddled hard for several hours to get up around American Point. We didn't even get lost this year! That is a major accomplishment for us. It helped to have two maps and be familiar with the area.﻿ 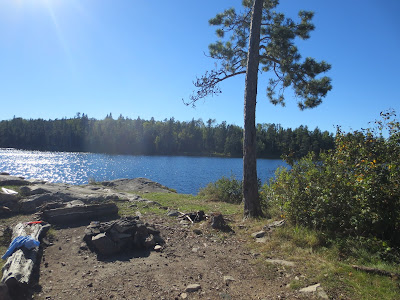 We got to camp a little after noon. We had passed by a nice shaded site I would have rather had but you really don't know what you're missing if you don't keep exploring. We stayed on a island with a 4 rated site that was the only campsite on the small inlet of Lake Saganaga. We were across the lake from our first portage of the next day.

We offloaded our gear and set up the tent before going back out fishing. Scott caught a nice walleye and we had that for dinner, along with Pasta Roni noodles, and some of our dehydrated vegetables. Despite not having any portages that first day, we were plenty tired from paddling across Saganaga, and would have 4 the next day so we didn't stay up late.