We Be Prime, Our First Experience with Amazon Restaurants

myownplace
2/23/2017
amazon food resolution
☺﻿It was a rainy Wednesday, an all day soaker which is unusual for the middle of February in Tampa. It was more like summer rain, spitting on everything. That means Busch Gardens was closed early, I didn't have any reason to walk to the library, and the new sale at Publix didn't start til tomorrow. But I was itching to do something after a boring day at work. I had extra energy since I didn't ride my bike on this rainy day, so I started perusing email and the internet.

We've had a lot of birthday offers for DH this month and have tried to take advantage of the best ones. On Tuesday we ate at Grimaldi's using the free birthday pizza coupon (totally worth it folks), and over the weekend we had free Kobe teppanyaki dinner, Moes burrito, Starbucks Venti Snickers Frappuccino, and a Papa Johns pizza. But we still have the Hooters 10 chicken wings, Buffalo Wild 6 wings and Jersey Mikes sub sandwich to use. Plus I noticed a $20 credit to try out Amazon Restaurants, a new service they offer kind of like Uber Eats. You order the meal online and it gets delivered within the hour. Being that it was rainy, this was the offer I decided we could do without having to deal with traffic and the rain.

So, I go to Amazon Restaurants and picked Hooters because I had a hankering for chicken wings. The minimum was $20 and I had a promo code for $20 so it would be essentially free. We picked 20 wings, 10 Daytona style and 10 Original honey bbq. Delivery is free and with tax and a $2 tip, it came to $3.49 to be charged to my credit card on my Amazon account. They send you an email, and a text when the driver is on the way, and you can track the driver progress on a live time map (like Uber). So, it was pretty cool.

We were excited to try out this great new convenient service and wondered how the wings would be. We knew they wouldn't be piping hot like they are at the Firehouse Grill and Pub just down the street, but for free we figured we could pop them in the oven to heat up when we wanted to eat. So the driver pulls up, delivers the food and we plop the bag on the table. I opened up the first box and it looked kind of empty, so I count the wings and sure enough there was not enough. There were only 8 Daytona style wings when there should have been 10. I opened the other box and counted 10, yippee. But, we were not satisfied at missing 20% of our portion, so we had to let them know of our dissatisfaction. I clicked the link on the email asking for feedback and it immediately goes to a CALL ME button, so Amazon calls DH. 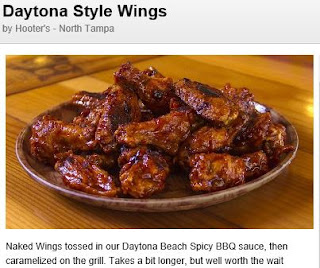 DH explains the problem and Amazon graciously offers to provide a full refund of $21.39 (they apparently didn't care we used a promo code) and to replace the order. So the agent places another order for us, we hang up and check email for order details. The agent said we would get the order replaced, but she only ordered half the order, the 10 Original wings. But the problem was the Daytona wings and if we were only going to get 10 more wings we wanted the Daytona wings. So, DH clicks the CALL ME link and Amazon calls us again. Now comes the drama. Amazon said they couldn't change anything anymore. DH huffs and puffs and demands a supervisor, and gets James The Giant who would not bow to loud voices and shaking timbers. DH is pissed off and dumbfounded. I try to explain that's not how Amazon works, you need to use their automated clicks and links and feedback buttons to get action. While he's blowing steam out his ears and his hair is getting gray, I get on the phone to Hooters to ask them to hold the order until we get it straightened out with Amazon. Five minutes later, there is no resolution so I call them back and say just switch the flavors and send the 10 Daytona wings and we'll be content. Okay, so a lot of time has gone by, over an hour and we get a text, the driver is on the way with our new order. 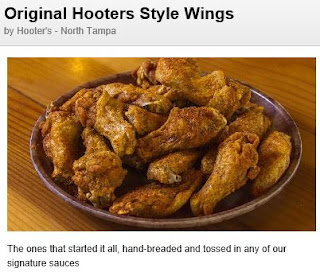 So, we're having a beer outside watching the rain, listening to KQ92 on IHeartRadio, and as usual when we have a customer service issue with a merchant we always say to ourselves WWMD? (what would Melissa do). My sister and I are opposites of the spectrum as far as money is concerned. So, we just kind of do it as a joke to bring a little reality into the situation, because some times we make a mountain out of a molehill and need to just drop the issue. The driver pulls up.

About now we're still trying to figure out what happened to get to this point but DH is nice to the driver, tips him and gets the food bag. It's heavy, oh my. Did we get the right order? The receipt says our name so it must be right. We open it up and it's two boxes of wings, 10 Original and 10 Daytona style wings. Good for Hooters, they exceeded my expectations. For the first time though, since they are notorious for shorting the wing count on orders (this was not the first time they have done that, and when you ask for the correct quantity you paid for they look at you like you have 2 heads).

We eat the Daytona wings and save the bbq for another time, along with the other 10 wings we still had from the first order. Guess we don't need to get wings from the Firehouse this weekend. Anyway, after dinner I went back to the computer and saw the emails from Amazon customer service, one of them had the feedback button on our experience so I clicked through and rated it poor in all areas of food quality, timeliness, and accuracy. Then a detailed comment on how it was our first Amazon Restaurants experience and it would be our last. And that was that. Until the phone rang.

An unknown caller from Washington. Kind of unusual, but DH always answers his phone because he likes to yell at solicitors who bother him. Anyway, it was Justin from Amazon. He was concerned we weren't happy with our first Amazon Restaurants experience. He commiserated with DH about how when you're hungry, you're hungry man, you don't want to wait two hours to eat! They were doing the man bro dance on the phone and Justin offers up an Amazon gift card to make us happy, cuz we be Prime. Oh boy, it must have worked because DH was chuckling and amused with this smooth dude Justin. He was happy for the first time that evening.
﻿