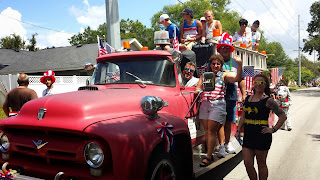 Wow. Back to work Monday mornings are really hard, especially after a nice long holiday weekend. It was a scorcher this weekend with lots of storms popping up, but we managed to attend the annual Temple Terrace 4th of July parade, and the BBQ afterward without getting rained on. The fireworks later than evening were a little delayed, but the wait was worth it.

The big NASCAR races at Daytona were really weird this year with rain delays and some big crashes. Scotts driver from the pool happened to win by a long shot, so he collected $50 for the winning. We had started the weekend off Thursday night by attending the races at Showtime speedway in Pinellas Park. Rain of course threatened, but in the end we saw most of the show. I got a nice video of the Crazy 8 Bus races that I'll post on Youtube later. Scott almost won the 50/50 drawing, his number was one off from the winner! It would have been a $186 pot of green. Oh well, he won the NASCAR pool.

We did have a little drama with our dog this weekend. She still has vertigo which has been troubling her since April. This dizziness has made her leary of going into the pool for a dip on hot days but sometimes she just can't take it and gives it a try. Well, Friday afternoon she stepped in on the top step and slipped and fell all the way in the water. Luckily I was outside with her because she started drowning. She had no orientation of what way was up and she just started spinning down to the bottom, head first. She can not swim with the vertigo. I ran and jumped in the pool with my clothes on and scooped her out. She was shaking and exhausted and probably in a little shock. She got out and settled down, but we decided to put a chair on the top step to prevent her from going in the pool again.

On Saturday, there was another drowning attempt at night. This time it was night and we had the pool light because it looks cool. She was by the deep end looking in the water and she lost her sense of spacial perception and accidently put a foot over the edge and fell in. She started swirling downward again, and DH was out with her this time. He ran and grabbed the net and used the long pole to scoop around her waist and draw her to the step out on the deep end. She was down longer this time and had swallowed more water, but she was still conscious while exhausted. She was breathing but wouldn't move from the deck where she lay panting. So, we put another chair in the deep end step out. But other than that we just need to hope she stays away from the pool.