The Real Reason I Don't Go To Movies 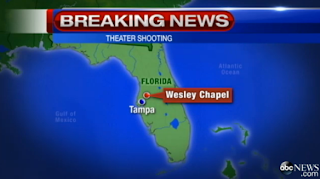 Yesterday this happened in a nearby movie theater. It was a senseless situation where one patron pissed off another patron with inappropriate cell phone use in a movie theater. In the end, one man is dead, and the other likely will be in jail the rest of his life. And a three year old child will not have her father anymore. Just because fate brought two couples together at the movies.

I'm sure we've all been to the movies and been pissed off at patrons around us. Maybe not pissed enough to shoot someone, but nevertheless - pissed off and ruined the mood to watch a movie.  To me going to the movies should be a pleasant experience. But it rarely is. I only go about once every two or three years. I can name the three movies I've seen at a theatre in the last ten years - The Notebook, Magic Mike and Captain Phillips.

The real reason I don't go to movies is that people are inconsiderate. It ruins the experience for me if someone is doing something distracting. The big screen and the loud sound really draw you in to the experience; but to have a distraction is annoying. And the offender is usually an idiot and doesn't respond to your non verbal glares, or shushes to be quiet.  Sure you could move seats, but what if you like to sit halfway up in the center of the theater? Why should you have to move because some one is being an ass?

The only way I'll go to a movie is if its in the middle of the day when hardly no one will be in the theatre. But we will be carrying. Everyone who has a permit carries in a theater, especially if you have to park and walk down deserted streets at night to get there. But I can assure you, that in a situation similar to the movie theater shooting yesterday, there are choices to make. Avoidance and retreat are two options.

What a sad day.